Moreover, he conducted research in disciplines such as earth and environmental sciences, economics, engineering, anthropology, and policy sciences. Professor Hoekstra established the interdisciplinary field of water footprint and virtual water trade analysis. This research field focuses on the relations between water management, consumption and trade. He further created the water footprint concept in 2002 and co-founded the Water Footprint Network in 2008.

In the interview, professor Hoekstra stresses the need to assess water scarcity on a global level by taking into account concepts such as virtual water and national water footprints. The interview also addresses other water-related issues. What country has the largest national footprint? Why needs water to have a value? Which countries are very dependent on water-intensive commodities?

How would you define the ‘globalization of water’? 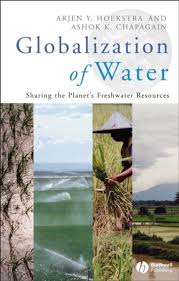 It is generally thought that water is a local resource, to be managed at catchment or river basin level. However, it is not. Freshwater issues should really be considered in a global context. Local water depletion and pollution are often closely tied to the structure of the global economy. Water is often used to produce exported goods. International trade in commodities implies long-distance transfers of water in virtual form, where virtual water is understood as the volume of water that has been used to produce a commodity and that is thus virtually embedded in it. Knowledge about the virtual-water flows entering and leaving a country can cast a completely new light on the actual water scarcity of a country. For example, Jordan imports about 5 to 7 billion m3 of virtual water per year, which is in sharp contrast with the 1 billion m3 of water withdrawn annually from domestic water sources. This means that people in Jordan apparently survive owing to the import of water-intensive commodities from elsewhere, for example the USA.

What are the main consequences of this form of globalization?

It becomes increasingly relevant to consider the linkages between consumption of people and impacts on freshwater systems. This can improve our understanding of the processes that drive changes imposed on freshwater systems and help to develop policies of wise water governance. I introduced the water-footprint concept as an indicator that maps the human consumption on global freshwater resources. Trade can enhance global water use efficiency, but at the same time it can simply shift the environmental burden to a distant location.

What is the impact of international trade on global water use?

International trade in water-intensive goods like food, cotton and paper means that the demand for water is shifted from the place of consumption to the place of production. Many countries, like most European countries, have thus largely externalised their water footprint.

How would you define ‘virtual water’?

How can the ‘virtual water’ concept help in preventing and resolving conflicts?

It is important to know how much water leaves or enters a country in virtual form. Water-scarce countries can reduce the pressure on domestic water resources by making sure that cheap water-intensive products are imported and only water-extensive high-value commodities are exported. In other words: importing grains in the Middle East resolves water shortages in this region. It’s too simple to say that virtual water trade resolves conflict, but careful analysis of how a national production and trade pattern influences the domestic water system will obviously enhance the knowledge base for making wise decisions.

What is the ‘water footprint’ of a nation?

What are the advantages of the ‘water footprint’ indicator?

Traditionally, water use is measured by looking at the freshwater withdrawals for the various sectors of the economy. As a result, water policies have always focused on the direct water users, leaving indirect water users out of scope. The water footprint concept takes a supply-chain perspective. By looking at the water footprint of final consumer goods, the attention shifts to the role of consumers and large food processors and retailers that process and sell final consumer goods. Both consumers and companies can have a vital role in mitigating problems of water depletion and pollution. And governments can take responsibility by enforcing product transparency, so that consumers can trust that what they consume is produced without jeopardizing scarcely available freshwater resources.

Which countries do have the largest national footprints?

The USA has a water footprint per head that is double the world average. This is because they consume a lot of highly water-intensive goods, like meat. Some developing countries also have a high water footprint, not because they have such a large consumption, but because agriculture is highly inefficient with water.

The value of water

Why do you argue that water does have a value, despite coming for free?

Annual rain and annual river discharge are limited. Although we often would like to have more water, we cannot use more rain or river water then available at a certain location and point in time. In other words, freshwater is scarce. The fact that water is a public resource without a market to establish a trade price for it, does not mean it has no value. Treating water as if it has no value – which is current practice in many places on earth – leads to overdraw and depletion. Decisions on water allocation should be based on its value.

What makes water a ‘geopolitical resource’?

Water has much in common with oil. Some countries have sufficient, others don’t. Both water and energy are key inputs into any economy, so countries without the basic source will depend on other countries that do have it. North Africa and the Middle East, but also countries like Mexico and Japan are heavily dependent on the import of water-intensive commodities.

Harm de Blij: Why Geography Matters, More Than Ever