Dr Lorraine Dowler is Associate Professor of Women’s Studies at Pennsylvania State University. She obtained a PhD in Geography at Syracuse University, and holds an MLA in Landscape Architecture and a BS in Marketing. Her research interests include gender, militarization, social theory, cultural geography and qualitative methods.

I was trained as a cultural geographer who was interested in political representation, with an emphasis on gender.

I was encouraged by several feminist scholars, in particular Lynn Staheli and Joanne Sharp to present and publish in venues that were more typically associated with political geography. 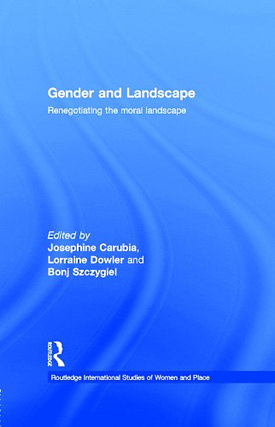 I am interested in topics that have often been overlooked in geopolitics such as how people are militarized on an everyday level. I’m particularly interested in how gendered representations often become the weapons of the state to justify violent action.

A quote by the Dalai Lama from this article: “The reality of war” – Dalai Lama

“We should think carefully about the reality of war. Most of us have been conditioned to regard military combat as exciting and glamorous – an opportunity for men to prove their competence and courage. […] War is neither glamorous nor attractive. It is monstrous. Its very nature is one of tragedy and suffering.”

Cynthia Enloe: For over three decades she has educated generations of feminist scholars on how international relations is determined, policed and restricted by the experiences and desires of ‘statesmen’.

She has directed us to examine the transnational experience of women. She is also one of the most approachable scholars in the academy consistently offering support and advice to young feminist scholars.

“Does Kaki Become You? The Militarization of Women’s Lives” by Cynthia Enloe (1983).

This book was exceptional given Enloe’s challenge to how the military controls men and women’s sexuality and gender in order to maximize military operational efficiency.

I don’t have one favourite site but I visit these two on a regular basis:

It is my hope that geopolitical science and feminist political geography can support work together in order to move forward with research that details the impacts of political violence on all peoples regardless of gender, race, sexuality and class.

The militarization of everyday lives, which paves the way for violent political action.

A critical understanding of Peace.