Marijn Nieuwenhuis teaches International Relations and Political Geography at the Department of Politics and International Studies at the University of Warwick. He finished his PhD in late 2013 on the emergence and evolution of modern territory in China. Marijn is currently in the process of converting his PhD into a book. Marijn has since the completion of his PhD become increasingly interested in non-terrestrial understandings of territory. His recent work looks at the idea, medium and concept of air and its relationship to geography.

I honestly can’t say that I really remember when I first ‘discovered’ geopolitics. In many ways I find myself rediscovering geo-politics on a weekly, if not daily basis. I think it’s the very changeability of the geo which attracted me to the discipline of geography.

I like to think that I have always been interested in the idea of the permanence of and truth that stems from borders, maps, territory but also architecture, urban planning and landscape paintings. Becoming aware that nothing is static or lasts forever has not only been an ongoing process of growing-up for me but remains also a source of marvel and wonder.

I have become increasingly interested in the word ‘geo’ in geopolitics. I think that there is something baffling about the idea that the earth and the political somehow form an organic unity.

I am as much interested in the historical and the political reasons why we look so much “down” to the earth as the site where both the problem and the solution to politics resides.

I have only just finished my PhD so I think it would be dishonest to argue that I have made any noteworthy contribution thus far to the discipline. Moreover, I think that such a question is really for others to judge.

I would be happy if my work, inside or outside of the classroom, changes people’s attitudes and perceptions of everyday places and practises. At the start of every academic year I tell my students to cultivate a ‘spatial sensitivity’ through which the world can be imagined differently.

I think I have not come across one that I am fully happy with. In my lectures on critical geopolitics, I sometime cite Gearóid Ó. Tuathail’s definition:

“[Critical geopolitics] is not an “is” but a question… As an approach that seeks to assert the irreducible textuality of ‘geography,’ critical geopolitics does not lend itself to the constative form; it is not an “is” but, in the manner of deconstruction, it takes place. It is parasitical on that which is addresses, working within the con-textuality it explores to displace the infrastructures of geopolitics… [I]t’s mode of operation is a mobile, guerrilla one that uses what is at hand within a terrain governed by hegemonic political understandings in order to advance critical positions in a permanent state of war.”
(Critical Geopolitics, 1996)

I like the militant open-endedness of that definition. For me it provides a window of opportunity to work against the terrestrial fixity of many conventional geopolitical imaginations. I like to think that this freedom will maybe one day provide also opportunities to work altogether outside of the con-textuality of geopolitics.

I do not think I am a very confined or organised reader. The meaning of geopolitics is for me really first and foremost a question worthy to be asked. I read in between, beyond and around themes that could be said to be related to the ‘geopolitical’.

Of course, I like the work of established names such John Agnew, Derek Gregory, Klaus Dodds, Stuart Elden and many others. I find their work theoretically grounded and speaking to real existing political questions. Elden’s Birth of Territory (2013) is especially a meticulously researched piece of scholarship.

I am personally very keen on work which is committed to a particular politics. I grew up as a student and as a researcher with the dedicated work of geographers such as David Harvey, Neil Smith and Doreen Massey. I think that such work is and will remain important and inspirational for decades to come. I hope that most of my existing and future work will similarly follow in the footsteps of Henri Lefebvre and maybe of Marx himself.

A third and final branch of research I admire, for lack of a better word, is the kind of work which is more philosophical and speculative in nature. I like engaging with the ideas of thinkers such as Peter Sloterdijk, Bernard Stiegler, Luce Irigaray, Edward Casey but I also like the more non-conventional though experiments of people like Graham Harman and Quentin Meillassoux.

I don’t think I have one favourite book, but I guess that there could be a whole range of books that I again and again will return to. I am not really sure which one to mention to be honest.

I actually follow a couple: the websites of Antipode, Society and Space, Stuart Elden’s progressive geographies and the blogs of Phil Steinberg, Jeremy Crampton among some others

I feel a little uncomfortable about the idea of geopolitics as a “science”.

Having said that however, I can well imagine that there will be an increasing emphasis on the importance of the relationship between law and geopolitics. Some time ago I attended a talk by Alex Jeffrey on legal geopolitics which opened-up a whole new range of questions.

I also like David Delaney’s work on nomospheres which I think should receive more attention. I also hope that we will soon see a final bridging between IR and political geography. The divide is not as large as it used to be, but I think a lot more remains to be done.

I hope to see a further and deeper problematisation of the terrestrial bias in the discipline. I think that the work of Peter Adey, Phil Steinberg and others have cleared the way for a more radical, perhaps even elemental understanding of the geo-as-politics. I think this embryonic shift needs to be contextualised also in relation to developments elsewhere.

David Macauley’s beautiful book Elemental Philosophy needs probably mentioning here, but also Steven Connor’s The Matter of Air and, of course, the original works of people like Tim Ingold and many others. 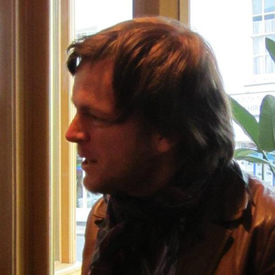 Without a doubt, I’d say global warming and the changing climate and weather conditions.
I think that political geographers are for the most part still only at the start of engaging with the geopolitical consequences of what I think is, for reasons of historicisation, problematically called the ‘Anthropocene’.

The work of Simon Dalby has started to uncover some of the geopolitical challenges that practices such as geoengineering might pose to borders, migration, ethics and international law. Such research is however still in its infancy.

I would like to see such discussions also confront complicated questions over the relationship between technology, geography and ontology. I think that the work of Bernard Stiegler could perhaps be of relevance for political geographers in such future research.

Paula Sabloff: Does Everyone Want Democracy? Insights from Mongolia