Pádraig Carmody (Dublin, 1968) holds a BA and MSc from Trinity College Dublin and a PhD from the University of Minnesota. His recent research centred on the political economy of globalization in Africa. He is Lecturer in Geography at Trinity College in Dublin. Moreover, he works as Research Associate at the Institute for International Integration Studies.

In this interview, Mr Carmody answers timely questions about Africa’s security. How does the scramble for natural resources affect local conflicts? Will climate change raise regional insecurity? And will the establishment of AFRICOM have a positive effect on Africa’s security? The other part is Pádraig Carmody: Africa’s economic development and globalisation .

What could be the consequences for regional security of the scramble for Africa’s natural resources between US, China and other external powers? 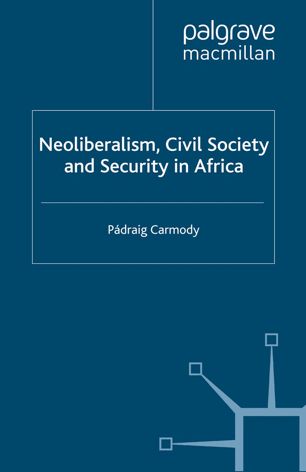 This partly depends on the national and regional context. The difference between this round of scrambling and the original scramble is that African countries now have independence governments so foreign powers have to be much more involved in negotiating resource access rather than simply taking it by force.

In terms of China and the US the important thing to remember is that while there is competition over specific resources in specific places they both have a shared interest, with the EU in the continued exportation of Africa’s natural resources, so there are incentives for collaboration as well.

All major world powers then have an interest in promoting security, but paradoxically their interest in the promotion of resource exports often promotes conflict. This is one of the ways in which the contradictions of globalisation find expression on the continent.

The other thing to remember is that China is dependent on the US for its market and the US is dependent on the Chinese government to buy its government debt. The bilateral relationship is more important to both parties than anything that is going on in Africa. Neither side will allow Africa to compromise that. That means that what geopolitically infused resource conflicts there might be in Africa will continue to be proxy ones, which are relatively low stakes for the major powers, if not for the people affected.

How did the creation of the US Africa Command (AFRICOM) in 2007 affect Africa’s security?

It is difficult to say as this is still a new initiative, but it is part of a trend of the militarization of the continent to protect oil exports and guard against potential terrorist attacks on oil pipeline and “ungoverned spaces” emerging where terrorist can avoid detection.

Again I would say the impacts are dialectical. Obviously properly trained and equipped security forces can help stabilize insecure regions or countries, but it depends on where they originate from, how their intervention is perceived and what the nature of their mission is. As far as I understand it AFRICOM is still based out of Europe, and no African country other than perhaps Liberia is keen to accept a new American military base.

Jeremy Kennan has done work on the impacts of the Pan-Sahel Counterterrorism initiative and he has found that the insertion of American special forces in the Sahel has actually fostered rebellion and insecurity where it previously did not exist.

“The creation of AFRICOM and other US military initiatives in Africa have to be seen also in the context of geoeconomic competition with China on the continent.”

The creation of AFRICOM and other US military initiatives in Africa have to be seen also in the context of geoeconomic competition with China on the continent. This is acute in certain oil rich countries such as Sudan (where China is supportive of Al-Bashir, whereas the US is much closer to the Southern Sudanese government).

My overall sense is that while there is an overall trend towards conflict reduction in Africa, this has largely been to do with more favourable global economic conditions, until 2008 rather than with new security initiatives. Militarisation, particularly where it involves foreign forces is likely to generate resentment and foster conflict as in Niger for example.

What effects did free market policies have on Africa’s security?

This is a very complex question as the effects of free market polices varied nationally and regionally depending on pre-existing conditions and how liberalisation was negotiated domestically.

In some cases neoliberalism is implicated in state failure or near state failure as in Zimbabwe for example. In others it was associated with limited economic recovery and state consolidation as in Uganda and Ghana, which is now one of the few examples of a consolidated democracy on the sub-continent.

What is interesting though is that free market policies are about the deliberate creation of insecurity in the labour market by “freeing it”. While there is obviously a necessary balance between labour market flexibility and social security, free market policies on the continent have often been applied dogmatically and the resultant increases in poverty have undermined human security and often fostered conflict.

“The opportunity cost of conflict for youth in a context of severe unemployment is near nil and in some cases guerrilla groups and insurgents actually employ and pay youth to join.”

The opportunity cost of conflict for youth in a context of severe unemployment is near nil and in some cases guerrilla groups and insurgents actually employ and pay youth to join as is the case for the Shabbab in Somalia. Also where authoritarian governments have been supported by Western donors and their human rights abuses largely overlooked because they deliver internal security and free market reform, insecurity has often been projected outwards. For example, Uganda’s intervention and plundering of the Democratic Republic of Congo, could be seen largely as an attempt to consolidate the Museveni regimes control.

Which impact will climate change have on Africa’s security?

This is a hotly debated topic. Some have a dystopic vision of huge increases in poverty, environmental refugee flows and massively increased conflict.

“Climate change is constantly occurring and is not just the result of increased anthropogenic greenhouse gas emissions.”

The climate change specialists I have spoken to have a more nuanced view. They argue that climate change is constantly occurring and is not just the result of increased anthropogenic greenhouse gas emissions. Also some note that humans have adapted to climates in the Artic Circle to the tropics over a seventy degree temperature range and that Africans have shown themselves repeatedly to be adaptive and resilient. Also some parts of the continent will get wetter, whereas others will get dryer, so the regional impacts will vary.

“The vision of large-scale long distance climatically induced migration is unlikely to be realised because that requires resources to be able to move.”

The vision of large-scale long distance climatically induced migration is unlikely to be realised because that requires resources to be able to move. Climatically induced migration is likely to be over a shorter range and conflict, it seems to me, is only really likely to increase where there other factors at play. For example, I think we can look at the conflict in Darfur, Sudan as a multi-level resource conflict over both oil and water. The droughts have enhanced competition between pastoralists and settled farmers over access to land , but I think it because the government has a wider of agenda of protecting its access to oil rents and that it has sponsored militias that the conflict has become as widescale as it has.

“It is difficult to pick out the impacts of climate change in isolation.”

The impact of climate change on broader human security and poverty could however be very significant as so many African livelihoods are dependent on agriculture. As we know poverty and conflict are highly correlated and interrelated. The extent to which poverty increases or decreases though is also affected by prices for food, mineral exports etc, so it is difficult to pick out the impacts of climate change in isolation.