Professor Frédéric Lasserre obtained his PhD in Geography at the University of Saint Etienne and currently works at the Department of Geography of Laval University in Quebec. One of his specialisations is the geopolitics of water. Dr Lasserre is also researcher at l’Institut québécois des hautes études internationales (IQHEI), where he heads l’Observatoire de recherches internationales sur l’eau (ORIE). Furthermore, he is researcher at la Chaire Raoul-Dandurand en études stratégiques et diplomatiques (Université du Québec à Montréal).

In this interview, Dr Lasserre discusses the main findings of his contributions to the book “Eaux et territoires”. Among the discussed topics are water conflicts, international law, water demand and supply and climate change. Mr Lasserre further elaborates on some countries that face water scarcity. 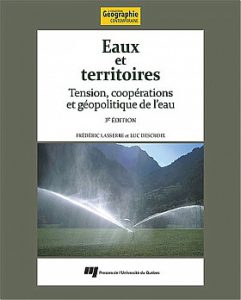 In the book “Eaux et territoires” you discuss several violent conflicts about the division of water resources. What were the main reasons that some water disputes turned into violent conflicts?

In the Middle East, or in Central Asia or in India, in the Cauvery basin, water disputes turned to be extremely tense or even erupted into violence, not merely because there were disputes about water sharing, but also because the tensions took place between in a frame of broader tensions: territorial disputes, border disputes, rivalry between States. Water thus became a tool to be used against an adversary, and water cooperation became impossible to develop as mistrust had grown to high levels.

To what extent is international law adequate to solve water disputes?

Water international law, now embodied in the New York Convention on the Law of Non-Navigational Uses of International Watercourses of 1997, is not a powerful tool to solve tense disputes. The Convention has the merit to eliminate competing juridical doctrines set up by States along the XIXth and XXth century, first appropriation, territorial integrity, absolute territorial sovereignty, that were put forth so as to justify countries’ claims. These doctrines are all rejected by the Convention that stresses three basic concepts: the obligation to cooperate ; the obligation to share equitably; the obligation not to cause significant damage.

These concepts seem fine, but the Convention does not explain how to solve an apparent contradiction between the last two: for instance, Egypt claims sharing the waters of the Nile with Ethiopia would lower its present share, thus creating significant damage. Since there is no definition of what “significant damage” is, only negotiation can solve this contradiction.

Besides, the Convention is faced with the limits of any international convention : it is effective only inasmuch as opposed countries agree to solve their dispute along its lines.

Under what circumstances can transboundary water resources stimulate cooperation among countries?

Transboundary water, by definition, is a moving resource that ignores boundaries. The water quantity and quality downstream depends on the natural parameters upstream (precipitation, evaporation) and how the water is used upstream. On the other hand, some infrastructure built upstream can be very beneficial for countries downstream as well, for instance dams to regulate the flow or to produce hydropower. Besides, proper water management, on the river basin scale, can be effective only if the relevant information about flow, natural intra and inter annual variations, and uses is shared.

Therefore, there are powerful economic incentives to cooperate, inasmuch as it can help optimize a sensible management of the water flow. But this is often easier said than done, as States often consider water information to be strategic and thus not to share ; and as they also often prefer to build reservoirs on their own territory rather than cooperating with neighbours. The Aswan Dam, in Egypt, is an excellent example of the wrong dam in the wrong place : a vast reservoir in the desert, it loses 12 billion m³ per year merely by evaporation, about 15% of the Nile flow…

The impact of water scarcity on selected countries

Is it likely that upstream Nile countries such as Ethiopia and Sudan will start using more Nile water at the cost of Egypt?

Sudan already uses a large share of the Nile, as the treaty it signed with Egypt in 1959 provides for Sudan to use 18,5 km³, or about 25% of the flow of the river after evaporation. But Sudan now would like to increase its share, thus questioning the 1959 treaty, which Egypt resents.

Ethiopia never signed the 1959 bilateral treaty, and therefore does not feel in any obligation to respect the arrangement set up by Egypt. It now uses a very small fraction of the Blue Nile, the main affluent of the Nile, but the country certainly would like to tap into its water resource to develop hydropower generation and irrigation. Egypt so far has always rejected Ethiopia’s claims, fearing any use by Ethiopia would mean less water for itself. As nearly all the waters of the Nile are used, it is true an increase of water use in Ethiopia would question Egypt’s share. But most water for irrigation in Egypt is used very inefficiently: there are ways to increase water productivity, freeing water volumes for Ethiopia.

Why does Turkey risk a violent conflict with Iraq and/or Syria by increasing its water use of Euphrates and Tigris?

Turkey developed the argument it had not, until the late 1980s, developed its uses of the Euphrates and Tigris waters, contrary to Syria and Iraq : it is true little irrigation and no hydropower production took place in Southeastern Turkey for long, whereas irrigation and dam building have long been developed downstream. Turkey therefore invoked its right to develop its fair share of the rivers.

However, Turkey acted very unilaterally, which triggered a strong opposition from Syria and Iraq, which feared, rightly, that if all planned Turkish dams were built, the rivers flow would be strongly reduced. Turkey felt that its military and political position – a member of NATO, allied to and upstream in the river basin, giving it the possibility to cut the river flow – secured its policy, and that neither Syria nor Iraq would dare go to war. So far, Ankara was proven right on this point.

What is the impact of the shrinking Aral Sea on regional stability in Central Asia?

The disappearing sea is impacting severely on climate and local population health. The Aral worked as a climate moderator, absorbing heat in the summer and releasing it in the winter. As the sea vanishes, the climate turns more continental – drier, hotter summers ; colder winters – with more storms in the summer that spreads salt and pesticide deposits on the former sea bed across the region, causing people poisoning.

The only economic impact was the destruction of the prosperous fishing industry around the Aral Sea, otherwise per se, this ecological disaster does not destabilize the region. It is the disputes around the sharing of the waters of the two rivers, the Syr Daria and Amou Daria, that fuels political bickering and potential instability, as well as disputes around how to develop cooperation so as to save the Aral Sea. So far, the regional countries have gone nowhere in cooperation, encouraging Kazakhstan to go alone with its plan to save the northern part of the Aral Sea by building a dyke blocking the inflow from the Syr Daria – a move that did help restore this part of the sea, but that will accelerate the decline of the larger, southern part.

Could water scarcity pose a threat to the political stability of China?

It is already doing so, as water scarcity in the North China Plain questions the very survival of many rural communities. The government decided to build the south-North Water Transfer from the Yangze River to the region, but it will not be enough to satisfy the whole growing demand for water. There have been riots in the region in the past because farmers were upset with the lack of water and/or its so poor quality that it could not even be used to water crops without killing them…

So far, China has refrained from seriously considering diverting an international river, but plans to do so in the Amur River basin or in the Brahmaputra River basin have triggered additional tensions with Russia and India respectively. The Chinese government is trying to reform rural water use, setting up water users associations so as to delegate this responsibility to the village level. Whether these institutional reforms will be enough to calm the country is the question.

The future of water scarcity

Global demand for fresh water is rapidly rising. What measures would be able to put a brake on water demand growth?

In how far is desalination a sustainable way to increase fresh water supply?

What effects could global warming have on the global supply of fresh water?

Some regions will benefit from larger precipitations, as a warmer atmosphere will evaporate more water that will end up with rain.

However, projections show some regions will definitely witness a decline in their precipitations, especially some regions already facing aridity: the Middle East and North Africa for instance, or the North China plain.

Other regions might see more rain, but more heat as well, resulting in higher evaporation that would end up with less runoff.

Climate change can also result in a change in precipitation patterns. In the American Rockies, for instance, precipitations are not forecast to diminish. However, there will likely be less snow and more rain in the winter: there will therefore be less water flowing from the snowmelt in spring and summer, when this water is most needed.