Charalampos Efstathopoulos is a Lecturer in the Department of International Politics at Aberystwyth University, Wales, UK. Charalampos’ research interests focus on the diplomacy of Southern powers in global governance. He specialises in the foreign policy of India and South Africa, and especially their diplomacy in international institutions such as the World Trade Organisation and the United Nations Security Council.

Charalampos was awarded his PhD at the University of Warwick in 2012. He is Associate Editor for the International Relations journal. 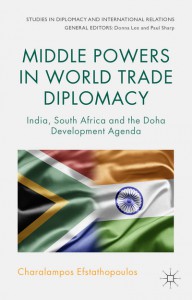 The book explores how the middle powers of the global South deploy different bargaining approaches to influence international economic negotiations. The book presents a comparative analysis of India and South Africa, and examines how the two states provided leadership in the negotiations of the World Trade Organisation (WTO) during 2001-13. The book argues that both countries played a critical role in shaping the various phases of the current round, the Doha Development Agenda. It also demonstrates that India was eventually successful in overcoming the limitations of middle power diplomacy and emerging as a major player in the WTO. In contrast, South Africa initially assumed a pivotal role as bridge-builder between North and South, but was unable to maintain an influential role in the more recent phases of the negotiations.

The book’s methodology involves an extensive analysis of WTO documents and public statements (speeches, press releases and international news reports). It also involves a focus on the ministerial conferences of the WTO, which comprise the highest decision-making body of the organisation.

The book presents three main findings. First, it argues that the bargaining approach of Southern middle powers does not aim at transforming the WTO, but rather at reforming the institution in order to place development at the centre of global trade governance. Second, the book argues that the bargaining influence of Southern middle powers is conditioned by two principal factors: (i) their ability to compensate for the lack of major power leadership; and (ii) their ability to mobilise follower states in the global South. 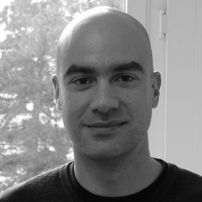 The book aspires to make two contributions. First, it aims to contribute to the field known as the politics of international trade. The field has traditionally been dominated by approaches that focus on different groups of developing countries, but more research is required to examine the influence of the leading powers of the global South. Recent studies have increasingly highlighted the role of the BRICS states, and this book seeks to further expand this research agenda by providing a detailed analysis of India and South Africa.

Second, the book aims to contribute to the study of middle powers. It demonstrates that the middle power concept is relevant to understanding the foreign policies of Southern powers and the nature of their influence in global governance. The concept allows for identifying the proactive role of Southern powers in different regimes, while delineating their preference for caution and reformism, rather than revisionist politics.

Most of the research for this book was conducted during my PhD at the University of Warwick. To complete the project, it was also important to look at more recent developments and especially the changing role of the BRICS after the outbreak of the 2008 global economic crisis. My future research plans are to focus furthermore on the role of the BRICS in the post-crisis order, and attempt to understand how these states are assuming different roles in the management of the global economy.

The role of middle powers in global governance can be examined to a greater extent and in different multilateral fora. The discipline of International Relations traditionally focuses on the role of major powers, but the contemporary global order has become more pluralist in various decision-making processes. Further research into multilateral fora such as the G-20 Leaders Summit could reveal the various roles that middle powers perform in the conduct of international affairs.