The book analyses political speeches from a range of theoretical approaches ranging from classical rhetoric to contemporary approaches such as the discourse-historical approach and critical metaphor analysis. It considers how traditional approaches of classical rhetoric may be integrated with modern ‘critical’ approaches such as critical metaphor analysis. Readers will understand a range of discourse theories that account for relationships between the linguistic features of speeches and the social and cultural contexts where they are spoken. 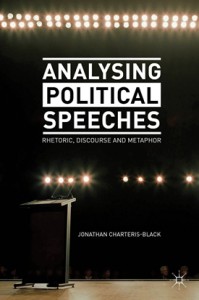 Each chapter is based around a detailed analysis of the discourse features of a particular speech. The speeches chosen to illustrate particular discourse theories are seminal ones by British and American politicians and military leaders. All speeches concern contemporary issues of social, cultural and political importance such as immigration, war and peace and illustrate effective persuasive strategies. The theory is explained and illustrated with reference to these particular speeches. There are self-check exercises to test understanding of theory (with answers at the back of the book).

Different theoretical approaches reveal different features of a speech and its persuasiveness arises from a complex interaction of these diverse features.

Through detailed and critically worked examples the book shows the continued relevance of rhetoric and the importance of taking political oratory seriously. Any student or academic interested in political oratory – theoretically, analytically or practically – will learn a great deal by reading this book in a way that will contribute to their future as critics, speech writers, editors or others involved in the analysis of language.

The book has been developed over six years of teaching to a third year undergraduate class at the University of the West of England. It reflects the experiences of students and their teacher in negotiating an understanding of different theories of discourse. Pedagogically this is by applying them to texts.

It was not possible to cover all the relevant theories of discourse, for example Paul Chilton’s discourse-space approach. It would also be interesting to develop a set of practical tips for speech writers that might arise from the theoretical work covered in the book.