Currently, he is professor in Geopolitics at the University of Bordeaux. His third book in the series “Traité de Relations Internationales” appears in Spring 2009. This book will be about globalisation, the other dealt with geopolitics and international relations.

In this interview, Mr Dussouy explains key subjects of the latter book. He discusses theories and concepts within International Relations (IR) and expresses his view on the current and future world order.

In your book “Les theories de l’interétatique”, you give an overview of Chinese theories about International Relations. What are their distinguishing features?

We can find elements or premises of theories in the Antic Chinese thoughts, among the philosophers who lived during the era of Spring and Autumn Kingdoms and during the time of The Warrior Kingdoms. They divided themselves between a Realist School and an Idealist School with quite similar ideas as their occidental counterparts. 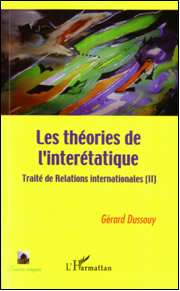 Today, after the ideological time of Marxism, we can distinguish three currents in the Chinese thought about globalization. The first, the autonomist school is reserved about an “Open Policy”. Another one, the globalist school, claims the “Sweet Emergence” of the Chinese power and the arrival of an era of interdependence. The last, named “Economic Nationalism”, is favourable to the “Open Policy” in the sense that it enforces the capacity of China to become a great power.

What are the main differences between French and Anglo-Saxon theories about International Relations?

There are no great differences between French and Anglo-Saxon theories about IR because there are no autonomous schools of IR in France (except for the historians). Generally speaking, this also holds true for Continental Europe. Or, then, it is “the best kept secret”, like K.E. Jorgensen has written! In France, Raymond Aron has been the only innovative thinker in IR so far (a “liberal-realist”).

Did you observe any convergence of Anglo-Saxon and French theories about International Relations during the last decades?

More than a convergence of Anglo-Saxon and French theories, I note the hegemony of the American schools. European students comment only on the American thesis, focusing on realist, liberal or constructivist according to the world context. The paradox is that English School is the most original because it links history and theory, and compares paradigms.

Which two levels of reterritorialisation of a state do you discuss in your book “Les theories de l’interétatique”?

What is the constructivist approach to identity and what is its interest in International Relations theory?

The constructivist approach does not consider identity as being fixed. On the contrary, it changes with the international context. The constructivist identity sums, at once, the self image, the images of the others, and the relations with them which change, in turn, the first. It is inter-subjective. It rejects ethnic and historic images of states or people. It stays trouble. However, its interest in IR theory is to show that perceptions and mutual perceptions can change, as Robert Jervis has proved.

How do you define pragmatic holism and what is its place within International Relations theory?

The pragmatic holism applied to IR considers the world system as a whole, particularly in light of globalisation. According to the hermeneutic circle principle (Dilthey, Gadamer, Rorty), the world system is the result of the interaction between the actors’ strategies which are based on different visions. Guided by their interests and values, the various actors(mainly states) strive to change the structure of their environment. Concurrently, this structure also constitutes a constraint on their strategies.

Facts and norms are inseparably linked and interact as well. The comprehension of the IR (i.e. the configuration of the world system) is an interpretation (a hermeneutic, because it is not a so-called true restitution of the real). The models take into account the interaction of various fields (natural space, demographic space, political space, economic space and symbolic space). Pragmatism permits so to surpass various paradigms including realist, liberal, constructivist and grotian.

How strong was the impact of realism and liberalism on the world order during and after the Cold War?

The recent success stories of realism (during the Cold war) and of liberalism (after the Cold war) prove the contextuality of any theory of IR. There is no scientific theory (definitively established) in social sciences. At best, the theory serves as an analytic instrument, like is the case in the pragmatic approach.

How would you describe today’s world order? What scenarios do you consider most likely for the evolvement of the world order during the 21st century?

Today’s world order is difficult to interpret. I have discussed three scenarios in my book “Quelle géopolitique au XXIème siècle?” and I carefully formulated an answer in “Les théories de la mondialité” (to be published in Spring 2009), taking into account the geopolitical consequences of globalisation. The market order of the globalisation is in crisis and a crash seems likely in the next years (following financial volatility and a deep economic depression). However, the change in the hierarchy of powers is a fact. Despite the unipolar position of the USA, the world inclines more and more to Asia.

At the same time, some destabilising factors have become stronger, worsening the potential scope of global governance. In this context, I think that European countries will face several crises next to the current financial one. The most severe weaknesses are either economic and social (employment, impoverishment), demographic (populations growing old) or societal (co-existence of ethnic communities). Lacking the capacity to further integrate (institutional weakness), Europe will be marginalized and its peoples will suffer. Perhaps, this will turn out to be a necessary condition for an awakening.

Allen Scott: A World in Emergence – Cities and Regions in the 21st Century