Béatrice Giblin is a geographer and Professor of Geopolitics. She is teaching at Paris 8 University (former experimental center of Vincennes). Professor Giblin is the founder of the French Institute of Geopolitics (2002) that she headed for ten years. Moreover, she is Head of the geographical and geopolitical magazine Hérodote, founded by Yves Lacoste whom she succeeded in 2006.

Professor Giblin was the first to talk about internal geopolitics in 1984 in an article dealing with power rivalries in the coalfield located in the Nord – Pas-de-Calais, the North region of France. Incidentally, the topic of her thesis was to analyze this region as a political territory, which was a a first in the French regional studies.

This interview is about the French book “Les conflits dans le monde: Approche géopolitique” that was edited by Professor Giblin.

1 What are the main themes of the book?

A typology of the different conflicts in the world, based on a geopolitical approach.

2 What are the central questions of the book?

How can we analyze territorial conflicts with a geopolitical approach? These concern conflicts that are the consequence of rivalries or power struggles to take control over a very specific territory and/or the population living there.

3 How have you sought to answer these questions?

Although war always follows from a conflict, not all conflicts lead to wars. Thus the notion of conflict must be approached by taking into account its complexity, gravity and duration. Also important is the size of the territory which is at stake: cities (social clashes and urban violences, city planning conflicts, urban wars), borders (wall-borders, uncertain borders, interstate conflicts), regions (infra-state conflicts, regional nationalisms) and States (conflicts for the control of resources).

With this aim in mind, we chose to analyze emblematic situations (Jerusalem, Western Sahara, the Balkans, Kurdistan, Sudan…) and two conflicts of international stature (the Israeli-Palestinian conflict and Afghanistan) which result from power rivalries on different territories.

4 What are the main findings of your book?

Academic geographers in France ignored the conflict phenomenon for a very long time: they excluded it from the field of their discipline. Yet the conflict indisputably belongs to what we call geographicity. In other words, geographers can and must take it into consideration in their research.

The only conflict geographers had analyzed before was the one between nomads and non-nomads. This conflict had been presented as the confrontation between two ‘ways of life’ adapted to constraining physical environments, which gave a determinist and simplistic vision of it. These two groups had been assumed to be necessarily opposed to each other, while reality is much more complex.

The book proves the efficacy of geographical reasoning when the latter not only includes physical and human factors, but also political factors and territorialized power issues. This holds true regardless of the nature of the conflict and the size of the territory at stake. The latter could be:

5 What does the book contribute to existing literature in the field?

The complexity and the diversity of the analyzed examples and the emblematic nature of some of them (Jeruzalem, partition in Sudan) make this book a real methodological tool and a reference book.

One of the main aspects of the geopolitical approach is to take into account the contradictory representations of the different protagonists in the territory at stake.
The objective observer of a conflict does not only need geographical knowledge of the territories at stake. In addition, it is necessary for her or him to understand how the actors involved in the conflict represent the disputed territory. Key examples are Israel (e.g. Zionism), the Arabian Peninsula (sacred territory of Islam) and the areas that are considered as the ‘birthplace’ of a people (e.g. Kosovo for the Serb people).

Sometimes geopolitical representations have no tangible historical, cultural or political foundations. Even even they are inaccurate or even untrue, such representations can be incredibly mobilizing.

The introduction of democratic institutions can be at the origin of new conflicts as well. These conflicts could not have appeared or developed earlier, in a context of political coercion or at least when the democratic freedoms were limited. The Balkans are a perfect example of how the democratic process made concealed conflicts turn into open conflicts. Furthermore, the dissolution of the U.S.S.R led to the resurgence of old conflicts that some people still had in mind. These conflicts had not been resolved properly in the past and had therefore subsisted in a latent way.

Democracy can create a favorable climate to the expression of new revendications which enlarges the field of power rivalries concerning territories. Indeed, we can observe this phenomenon concerning the vast land settlement operations and the apperance of new infrastructures which are more and more controversial.

6 How does the book relate to your own (personal/professional) background? 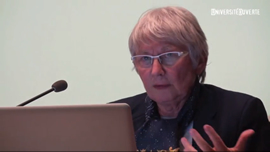 This book is on the one hand the result of teaching geopolitics for many years (most of the authors were my students). On the other hand, it is the result of doing research, especially concerning one of my favourite research interests (i.e. internal geopolitics that focuses on conflicts taking place in a national territory).

7 What further research into the book’s themes would you suggest?

More research into specific case studies because the number and complexity of conflicts are both still expanding. Recently, cyberspace turned into a new conflict ‘area’, where rival States keep a close watch on each other.

Béatrice Giblin: The Conflicts in the World – A Geopolitical Approach
Tagged on: Giblin-Béatrice

One thought on “Béatrice Giblin: The Conflicts in the World – A Geopolitical Approach”