Emel Akçali (1977) holds the Turkish and Cypriot nationality. She graduated in International Relations at both the American University (Paris, BA) and at the Université de Galatasaray (Istanbul, MA). Ms Akçali obtained her PhD in Political Geography at the Geography Institute of Paris IV-Sorbonne.

Her current position is Visiting Lecturer and Honorary Research Fellow at the Political Science and International Studies Department of University of Birmingham.

In this interview, dr Akçali gives her views on geopolitical realities, representations and aspirations of Cyprus. Moreover, dr Akçali addresses issues such as mental maps, conflict resolution and the role of the European Union.

What are the main research questions of your new book?

There is a variety of contrasting opinions among researchers and policy-makers about the role of geopolitics in the persistence of the Cyprus conflict.

Some argue that the island of Cyprus has geopolitical importance for regional and global powers. According to this view, regional and super powers will constantly try to dominate the island and its people and never let Cypriots rule their own land.

Others claim that emphasizing constantly the geopolitical importance of the island and securitizing the Cyprus problem hinders the resolution process of the Cyprus conflict.

Our departing point is that the island of Cyprus, divided territorially between a de facto republic and an internationally recognized EU member is situated at the junction of state, societal, transnational and supranational actors’ interests. It is thus cornered between modern geopolitical realities and post-modern geopolitical aspirations. The geopolitical representations of the island play an important role on the persistence of the Cyprus conflict, as well.

This book is an attempt to analyse Cyprus as a place in its own right and spot and scrutinize domestic and external geopolitical actors which contribute to the persistence of the Cyprus conflict. In so doing, it tries to come up with several suggestions for future peace-making efforts on the island.

Which theoretical concepts do you apply in your book? 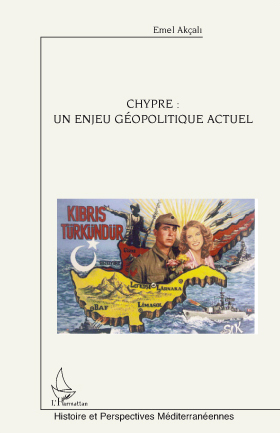 This book dedicates a key section to the development of geopolitics as a methodology to study spatio-political/spatio-economic events in the world and current debate between modern and post-modern understanding of geopolitics. It suggests that geopolitical studies today should contribute to the analysis of ethno-territorial conflicts and their resolution.

To be able to that, geopolitics should concentrate on the important roles played by non state (supra and transnational) actors, the conduct of international economy, geopolitical representations of state actors, the new definitions of the state, identity and territory at the age of globalisation and the role of societal actors in the persistence or resolution of ethno-territorial conflicts.

The book then analyses the Cyprus conflict and possibilities for its resolution within such a framework by relying on a meticulous empirical study on the field. I have spent nine months in total in Cyprus between February 2004 and January 2006 and conducted field research on all four administrations on the island: de facto Turkish Republic of Northern Cyprus, EU member Republic of Cyprus, buffer zone under UN control and sovereign British bases.

My field study in Cyprus has given me first hand experience on gathering and analyzing qualitative data, which included in-person interviews and mental maps with ordinary citizens and political elites. I have explored the ways in which mental maps can be used as qualitative tools to gather information about individuals’ spatial representations in contested territories.

What are the most important conclusions of your book?

The most important conclusion of the book is that in the current international system, regionalism seems to be the best option to help solve the existent intractable ethno-territorial conflicts. Such regionalism, however, should not be limited to European Union.

In fact, by incorporating the RoC, the EU set a very concrete frontier in the middle of the Mediterranean. After the RoC’s membership to the EU, non EU citizens, like Russians, Serbians and citizens of neighbouring Middle Eastern countries could no longer freely enter the RoC, while they had enjoyed the right before.

During the bombardment of Lebanon by the Israeli army in July 2006, for example, only Lebanese citizens with US, EU or Canadian passports could enter the RoC although the island was one of the few exits from their ravaged country. Their evacuation via the TRNC was further prevented by the RoC government, based on sovereignty claims.

A Mediterranean regionalism which includes countries of the region could have constituted a better option. Also, the island of Cyprus has a multicultural population. Today, besides its native Greek, Turkish, Armenian, Maronite, Latin Cypriot and Gypsy population, it is also the home of Anatolians, who have gradually settled on the island from Turkey since 1974; Pontians who came from Georgia via Greece together with various other immigrants since the 1990s; the Jews; and the British.

Despite this diversity, a solution to the Cyprus problem is still under the monopoly of Greek- and Turkish-Cypriot aspirations, with a resolution oriented between either a bi-zonal/bi-communal federation or a liberal democratic unitary state. The future peacemaking efforts need to take into consideration this multi-ethnic structure of the island.