David Slater was a British geographer with a BA and PhD. At the time of the interview, he was a Professor of Social and Political Geography at Loughborough University.

For more information about Professor Slater, please read the “In Memoriam” at the website of the American Association of Geographers (AAG) 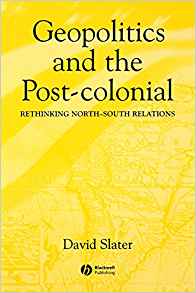 I have been interested in geopolitics since I was an undergraduate at Durham University in the mid-60s, and my concern for the subject related to my fascination for international relations seen in a spatial context. There are 4 themes which strike me as being paramount in the study of geopolitics.

First the changing nature of global politics, especially connected to North-South relations, and set in a context of imperial power and its dynamic. I would argue that the intersection of the global and the imperial constitutes a key theme for our work, and in the concentration of research on the global the imperial is often marginalised; it needs to be made central and linked into the nature of US power.

Second, the state and its spatiality requires sustained examination, both in relation to global pressures and inner societal tensions. A key factor here is the North/South divide, since, for example Western sovereignty is given far more weight, practically and conceptually, than Southern sovereignty, and also generalizations about the state are often made on the implicit basis of Western experience.

Third, we have a whole range of social movements that often form a kind of counter-geopolitics(eg the Zapatistas) since they question the established territorial anchorage of the existing nation state.

Fourthly, we have the question of our mode of enquiry; in my own case I attempt to combine ideas and concepts from post-structuralist and post-colonial thought, without abandoning Marxist perspectives especially the Gramscian variant. My criticality would be situated in this broad analytical field, giving emphasis to what has been called thinking otherwise, or going beyond the limits of Western knowledge.

In terms of intellectual influences, I would cite Edward Said’s “Orientalism” and “Culture and Imperialism”, as well as Rob Walker’s “Inside/Outside”.

However there are many other influences some direct and some indirect, and in a way the field of influence is like a palimpsest, or mosaic of changing forces and trends. I do not, and here I agree with Simon Dalby, believe in tight, rigid definitions of what geopolitics might be about. It is best seen as an open signifier, connected to the relations between space, power and politics but ever changing in its modality of being.

I would suggest that geopolitics and especially ‘critical geopolitics’ will become increasingly characterised by the analysis of war, security and conflict.

What needs more consideration is what I call the imperiality of power and the imperial mentality. In the West we have not gone beyond imperial thinking – our societies are still ensnared in modes of ethnocentric thinking that limit our understanding and reproduce situations of conflict. We need to decolonize geopolitics and move into a world characterised by more respect for the other and more cultural reciprocity. This is today’s urgent question. How do we move beyond the imperial cage?

We need to engage with non-Western intellectual traditions and learn from their historical depth. We need to abandon our cultural hubris and reach out without preconditions. We need to hear the words of the oppressed; we need to help the intifadas and condemn the continuance of colonial and imperial reason.