Katharyne Mitchell is Professor of Geography at the University of Washington and obtained a PhD in the same discipline at the University of California (Berkeley). What follows is her personal introduction in the first person (participants in the Geopolitical Passport series are usually introduced in third person).

Like many Americans I got a very (very!) broad undergraduate education, beginning in English and music theory as a freshman, then studying Danish and architecture (and failing out of English) during my junior year abroad, gravitating finally to art history by late in my senior year.

As I was clearly unemployable at that point, I taught English and studied Mandarin in Taiwan for two years, then worked in a caviar factory in China for part of another two. I failed at being a secretary and at making a living as a freelance writer in San Francisco, then started graduate school at Berkeley in the architecture department.

By some miracle I was rescued first by Manuel Castells, who directed me to geography, then by Allan Pred, who was and remains, the greatest influence on my thinking, and one of the people I most admire in geography. I’m now the chair of the geography department at the University of Washington in Seattle.

I studied in Copenhagen during my junior year of college and had a professor there who loathed the United States. (This was during the Reagan years and all the odious stuff that was going on in Latin America at that time–of which I was totally unaware).

I remember feeling shocked and defensive at first, but over time his critiques began to seep into my consciousness. The more I learned, the more I wanted to know–slowly absorbing the whole sordid mess of American imperialism played out both domestically and abroad. That was my introduction to geopolitics, and why, for me, it has always been associated with a strong desire to study and understand power and injustice in international affairs.

I have always been interested in questions around race and migration. I think these are both theoretically interesting and politically important, and they also make it necessary to link micro and macro political and geopolitical scales. I have also worked on citizenship formation, especially with respect to the philosophies and practices of immigrant integration. 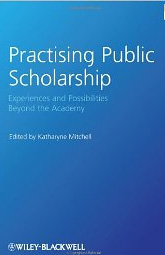 My work really falls inbetween most standard categories, such as ‘geopolitics’ or ‘economic geography.’ But in everything I do I try to bring a sense of urgency and passion to it, as well as a belief in the importance of working for political, economic and social justice. My latest book, “Practising Public Scholarship”, is the most direct manifestation of this effort.

The first takes me to some amazing feminist theory going back to Cynthia Enloe and up to great scholars like Judith Butler (and in geography–people like Jo Sharp, Anna Secor, Sue Roberts, Matt Sparke, Jennifer Hyndman, and a bunch of others.)

The second has been a productive tension for many in the field, including scholars as diverse in their interests as Neil Smith and Stuart Elden.

From my very first days in graduate school I have always felt that David Harvey is the clearest, most analytically precise and most prescient thinker in geography.

He linked geopolitics with geoeconomics long before it was fashionable to do so, and this has remained a constant thread in his work for over four decades. Furthermore, he always uses rich empirical (spatial!) evidence (Paris, Iraq) to back up his theoretical claims, and he writes with purpose and conviction–all things I greatly admire.

My favorite geopolitical book that I’ve read in the last year is “Little Bee”. Over the past 20 years it has to be “Catch 22”.

I find that novels like these effectively link the micro and macro processes which interest me, and also capture the absurdity, humor, pain, and structural violences that characterize much of contemporary geopolitics and the lives of those caught within it.

In the last few months I’ve started checking out the Blog of Stephen Walt after hearing him interviewed on the radio. He’s a well informed critic of Middle East politics, a region of the world of which I’m terribly ignorant, and obviously an area of critical importance these days. 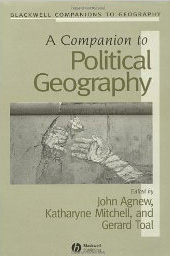 I think we will be examining the rise of fascism, and wondering how it was possible that we wasted so much valuable time in the 00s thinking about things like nonrepresentational theory.

Richard Wolin has some great articles on left fascism and the academy that ought to be required reading for all graduate students.

Following the recent Gulf oil spill and the still unfolding nuclear disaster in Japan, alongside what we already know about global climate change, it is increasingly evident that the relentless race for energy sources will bring us to the brink of ecological disaster well before the end of the 21st century.