Nick Megoran (1972) has studied at the universities of Durham, Roskilde, Osh and Cambridge.

He is currently Lecturer in Political Geography at Newcastle University.

Although I wouldn’t have understood it in this way at that time, it was during the Falklands War in 1982 when I was nine years old. Friends’ dads etc were in the armed forces, and I only heard patriotic support of the war. But I remember being profoundly disturbed at the rejoicing over the sinking of an Argentinean warship. I had a mental image of lots of sad Argentineans sinking to their deaths, and it disturbed me.

Then the war in Northern Ireland troubled me considerably, particularly how paramilitaries murdered policemen, soldiers, ordinary shoppers, etc – that shadowy killers should suddenly strike and kill and then disappear into the urban landscape frightened and angered me.

Some years later, in school, a brilliant teacher taught some electrifying lessons on the poetry of Wilfred Owen. He was a poet who fought and died in the First World War, but was very critical of it.

So, in childhood reflection the ground was prepared for studying geopolitics at university. At university I became a Christian, and was challenged by Jesus’ call to ‘love your enemies’ and live in a counter-cultural way, not merely eschewing retaliation but actively seeking the good of those who harm you. What does that look like with regards to Argentineans, Irish, and Germans, in Britain’s wars of the 20th century, I wondered? It was exciting but overwhelming to ask.

Then, I encountered critical geopolitics. To me, it seemed profoundly common-sensical, making obvious sense of the world in which I had grown up and had come to study. And it contained many pointers towards working out Jesus’ radical call to an alternative way of living and thinking.

Firstly, the geopolitics of Central Asia – an area that grabbed my interest as a child, and has always remained a passion. I love being there and simply enjoy writing about it. Equally, I loathe the way it is presented as dangerous in foreign geopolitics (academic, foreign policy, aid, film etc) and want to challenge this.

Secondly, the geopolitics of religion, especially the geopolitics of commemorating wars. It saddens me when followers of Jesus, named in the Bible as ‘The Prince of Peace’, develop geopolitical visions that make violence more likely; likewise, it excites me when they fulfil their calling to be what He called ‘peacemakers’ and promote good, mutually-enriching relationships between different human groups. Geopolitical theory can help understand how and why these two very different paths are taken.

I think my most important contribution is showing Central Asian studies why critical geopolitical theory needs to be taken seriously.

In terms of the broader study of the subject, I think it is making the argument that critical geopolitics hasn’t properly engaged with normative questions, and ought to commit itself to nonviolence. But this is something I have only just started working on.

John Agnew’s idea that it is about how “the world is actively ‘spatialized,’ divided up, labeled, sorted out into a hierarchy of places of greater or lesser ‘importance’ by political geographers, other academics and political leaders.” This is from his book Geopolitics.

What a marvellous sentence! I like it because it is broad, and because of its dynamism – describing geopolitics as an active process, and painting some marvellously evocative word pictures of how that is done by active agents. 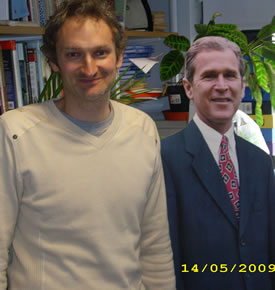 It’s the North American Irish exiles for me! Simon Dalby and Gerard Toal: what they say makes enormous sense of the world in which we live, and provokes and inspires me to try and do something about that world.

And also Gerry Kearns – especially the way he shows, with the eye of an historical geographer, how Mackinder’s world was interpreted differently by some of his contemporaries. These three writers all show not only how geopolitical thinking contributes towards making the world more violent, but that it can be otherwise.

I think it would be the book of the prophet Jeremiah in the Hebrew Bible. Jeremiah lived through a turbulent age in the international relations of what we now call ‘the Middle East’.

The Kingdom of Judah was badly governed by warlike leaders. The religious establishment and other elites supported the monarchy, blithely declaring that God was with them and backing their wars.

Jeremiah dissented, warning that the unjust social order on which apparent wealth was predicated would undo the nation. He opposed the war-preparations and alliance-making of his nation, suggesting that God wasn’t on their side because of the way they had built an unjust society (‘on your coat-tails is found the blood of the righteous poor’, he thundered at the elites). He was reviled and hated, condemned for being unpatriotic, and subject to harassment by the authorities and ostracism by society. He survived at least one attempt to assassinate him.

A sensitive man – the Bible narrative is no hagiography – he suffered greatly due to this, questioning whether he was really right and wishing for a quieter life. But he remained tenacious, unable to stop himself being passionately concerned about the injustices in his society. Eventually he was proved right and his country was over-run following a disastrous war.

However, he did not gloat, but offered practical visions of future hope and peace and a pathway towards it. It is a marvellous study in the conceit of geopolitics and the bravery of dissent.

Elie Wiesel’s remarkable short essay, ‘Jeremiah’, in his book Five Biblical Portraits is a great place to start for the unacquainted. Likewise US peace activist Dan Berrigan wrote an unusual but engaging book on Jeremiah, called Jeremiah: The World, The Wound of God. In true prophetic / critical geopolitical traditions, both of these writers use Jeremiah to reflect on the injustices and violence of their times.

This is the only (scholarly) one I have ever looked at!

A recent practical geopolitical website that interests me is that of the Reconciliation Walk. These people walked the length of the First Crusade apologising for it – an unusual and imaginative way to engage with the intersection between historical memory and contemporary geopolitical tensions.

I never make predictions about the future, and never will do.

Geopolitics is much better at war than at peace, and needs to redress this balance. By this, I mean that critical geopolitics has proved adept at uncovering and explicating the circumstances and techniques whereby geopolitical reasoning constructs and reinforces divisions and thus underwrites exclusion, fear, and ultimately violence. However, it has been much weaker at exploring the conditions whereby these processes might be reversed, and I think this is where a ‘pacific geopolitics’ could make a great positive contribution.

The same one that has always faced us: what do we each do about the selfishness and violence in our own hearts, and how do we stop that being translated into global politics?