Virginie Mamadouh is Associate Professor in Political and Cultural Geography at the University of Amsterdam. Ms Mamadouh is further involved with a number of journals such as Geopolitics and Political Geography.

I found Lacoste’s book “La géographie ca sert d’abord à faire la guerre” by accident on the bookshelves of the library and started reading the journal Hérodote regularly. My interest for international politics and peace and war issues was further boosted by the political geography classes I took with Herman van der Wusten, who was then the Professor of Political Geography at the University of Amsterdam.

Which geopolitical topics do you focus on and why have you chosen especially these?

I am interested in geopolitical representations and geographical imaginations, in other words in the justification of interactions with far away places. Three main topics are recurrent in my work.

The first is European integration and its consequences for territorial identities and geopolitical visions: I look at new geopolitical actors such as the European Union and subnational entity.

The second is situated at the intersection of geopolitics and media studies, especially the so-called new media like the Internet, exploring how people engage with new media to articulate new geopolitical imaginations (largely territorially unbounded ones); it is related to issues of collective action and transnational migration.

The next one of course!

Otherwise, my 1998 review article of the geopolitical literature is probably the most read. The typology I offered there to grasp the diversity of approaches in these expanding field turned out to be a useful tool for students.

There is no definition that would do justice to the diversity of the approaches geopolitics covers and there is no need for a single definition. That is part of the fun. I am interested in how geopolitics is deployed in rhetorical practices and embedded in social relations.

I pass for this one. I am not good in admiring people. A great publication or a great lecture does not make of someone a great person.

I could not pick a simple book. So many great books have been fascinating readings. I liked the experience of reading the classics (Ratzel, Mackinder, Bowman, Brunhes, Vallaux).

Must reads are of course:

I also recommend Stephen Graham’s Cities, War and Terrorism (2004) and, especially for those interested in the role of the media, Joanne Sharp’s Condensing the Cold War, Reader’s Digest and American Identity (2000) and Paul Adams’ Atlantic reverberations: French representations of an American presidential election (2007).

Last but not least get your copy of Michel Lussault’s De la lutte des classes à la lutte des places (2009). It is a short text, simply but convincingly explaining how humans are spatial beings in the first place, and how struggles are primarily about making place (no need to quarrel about whether economics, culture or politics come first…it is all about getting the best place under the sun).

May I suggest a non-academic website that try to disrupt established geopolitical imaginations. For example the Iraq Body Count website that aims at documented the death of civilians in the Iraq war or a webblog like Critical Spatial Practice

Unfortunately most of the websites of the relevant academic journals Geopolitics, Political Geography are only open to subscribers but some are public like

There is no such thing as geopolitical science. However, there are many directions for research.

There is a large consensus to acknowledge the importance of perceptions and representations but not much work on the working of the (new) media in these communication practices. Web 2 technologies, Google, GIS, GPS… Learning from communication geography would help strengthen our analysis of these geopolitical practices.

Besides, feminist geopolitics is emerging as an important subfield.

Justice remains the largest geopolitical challenge (as ever before) and any kind of inclusion and exclusion mechanisms, and bordering process. Justice at every scale, so also global justice. In these struggles for more justice, environmental issues remain key (resources, climate change, food); neoliberalism and accumulation by dispossession remains central ideologies; and identity politics keep providing powerful argumentations.

New ethical issues will appear with the development and the use of new technologies. I am especially worried about surveillance issues and the role of geoinformational technology for surveillance purposes.

Below you see a snapshot of a weblog of American citizens wanting to communicate their disappointment with the re-election of George W. Bush in 2004 to the rest of the world: 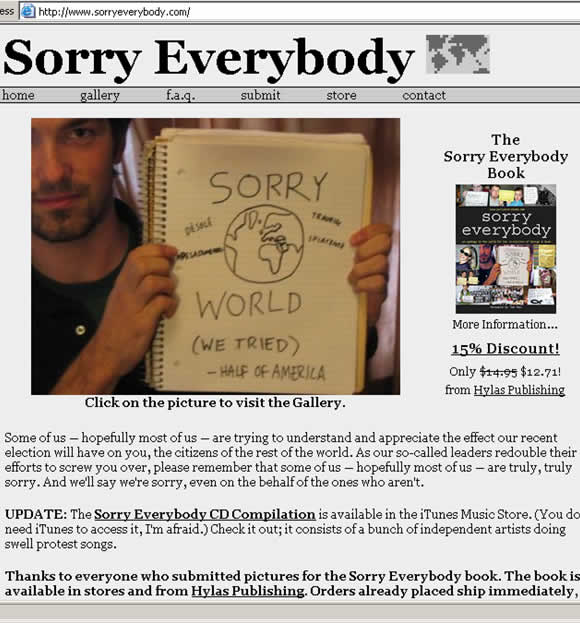