Dr Manlio Graziano teaches Geopolitics and Geopolitics of Religions at the American Graduate School of International Relations and Diplomacy in Paris, and at Paris IV – La Sorbonne. He holds a doctorate in Italian Politics from the Université Grenoble III (2004). He previously graduated from the University of Turin with a degree in French Literature.

Dr Graziano also taught at the École supérieure de Relations internationales in Lyons and at the LUISS University in Rome. From 2000 to 2011, he taught Italian history and civilization in several French universities.

He has published several books about geopolitics, the Catholic Church and national identity. He is a member of the editorial staff for the journals Outre-terre (Paris) and Geopolitical Affairs (London), and frequently collaborates with Limes (Rome).

I was very young interested in political affairs and struggles.

I encountered geopolitics when I discovered that politics is not a matter of clash of ideologies, but of clash of interests. When I discovered that the only way to understand politics is to weigh every single interest accurately and to put each one in relation to the geographical and historical contexts, and to the other interests at play, and not to consider who is right and who is wrong from an ethical point of view.

I have been working for several years on the role of religions and religious movements in political affairs.

I would say that I didn’t choose this issue but it chose me. In fact, I was studying the role of national identity in Italian nation-building, and obviously I had to deal a lot with the political role of the Catholic Church.

Thanks to my “Italian” experience, I had acquired the tools that possibly allowed me to study the political role of the Catholic Church in whatever region of the world, and it was then that I met the famous geopolitician Michel Korinman, who asked me to become his “specialist” for this particular issue.

When I was invited to teach at La Sorbonne, I was asked to enlarge my analysis to the entire spectrum of religions and international relations. This is why I am working right now on the comeback of religions as political actors on the global stage.

“Le hasard fait bien les choses”, as they say in France: Fate knows what it’s doing, because nobody would deny that this issue is a topic of substantial interest today. 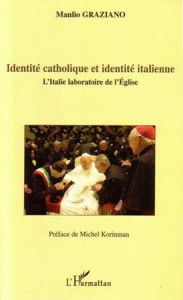 I should say that my work about the geopolitics of Italian nationhood was broadly appreciated, if you consider that it has been published not only in France and in Italy, but also in the US, by Palgrave-Macmillan.

However, I think my studies about the role of religions (and in particular of the Catholic Church) in international relations are more important because they contribute to fill a gap, if I may say so. In fact, it is very rare to find scholars who deal with religions from an exclusively (geo)political point of view.

When I do so, it is very difficult to explain that I am not talking about faith at all, but (if I can quote Graham Fuller) “about ‘organized religion’ as a supreme vehicle for many other facets of human aspirations, including politics, fears, drives, prejudices, dreams and bitterness.”

What is your favorite definition of geopolitics?

If I may quote from my recent handbook, I would say that “geopolitics deals with the combination, the relationship, and the reciprocal influences among the three dimensions that human beings cannot circumvent: their activity, in space and in time.”

But it is important to remember that there are many ways of using the geopolitical tools because international relations present many facets and each of them changes very rapidly (especially right now). Therefore, “geopolitics is the branch of the study of international relations to which people resort in times of great transformation of the relationships among the powers, whether this is by those contesting the established order (the ‘revisionists’), or those trying to preserve their privileges and prerogatives (the ‘conservatives’).”

Spykman is probably the geopolitical scientist I appreciate the most.

In fact, he was the first to assert clearly that “political ideals and visions unsupported by force appear to have little survival value”.

Moreover, he stated that “the realm of international politics is like a field of forces comparable to a magnetic field. At any given moment, there are certain large powers which operate in that field as poles. A shift in the relative strength of the poles or the emergence of new poles will change the field and shift the lines of force.”

This is a very helpful concept in understanding the ongoing shift of power at global level. Besides his analyses, major Spykman’s legacy is that we need to be ready to change our prospective, because when the world changes, the thoughts about the world need to change as well.

What is your favorite geopolitical book?

Of course, there are many of them.

But probably my favorite one is not a book of geopolitics, but a book of history: Paul Kennedy’s “Rise and Decline of Great Powers”. Kennedy was the first, after several decades, who studied the changing relative strengths of the leading nations in terms of uneven rate of growth among different societies.

In the 1980s, when he wrote his book, he was thinking of Japan, but this fundamental concept of “uneven growth” has been since essential in understanding the political rise of China, and other so-called “emerging powers”.

My favorite website is Istituto affari internazionali. On this website, it is possible to find very different points of view about different subjects.

It is interesting to note that, sometimes, middle powers like Italy can produce very interesting things in this field, because they are important enough to have their schools of international relations, but not enough to pursue exclusively their own national interests from their (supposedly) exclusive point of view.

So they are sort of “obligated” to take into account all points of view, at least in order to look for the broadest possibilities for maneuvering.

Geopolitics has long ago evolved toward a multifactorial analysis.

Since Spykman at least, it is clear that “neither does the entire foreign policy of a country lie in geography, nor does any part of that policy lie entirely on geography. The factors that condition the policy of states are many”.

Since Spykman’s times, though, things have dramatically changed in international relations. The international free-trade cycle started in the 1980s (commonly known as “globalization”) and the resulting end of the “bipolar era” opened a new phase in which states are no longer the exclusive actors of global politics.

In the future, non-state actors will be always more important. But in order to keep up with the pace of change, geopolitical analysis would need to study more deeply the relations among political actors than the actors themselves or, if you prefer, more the field of forces than the forces themselves.

Which does not mean at all, of course, that the study of the single actors (their economies, their societies, their histories, their geographies, their armies, their traditions, their religions, and so on) should in any way be abandoned.

The political role of religions and religious movements would definitely deserve much more attention.

For the world, the end of the American era, of course.

I cannot imagine which reaction they will have when they eventually found out that this time there will not be any recovery!

For geopolitics, I see a major risk: laziness. Even among some scholars, there is a tendency to keep following old patterns of thought, and keep analyzing the international situation as though we still were living in the old bipolar world, the old state-based system (the so-called “Westphalian order”).

If we are not able to catch up with the changes when they happen, and if we are not able to identify their multidimensional nature, for sure we will no longer be able to understand in which direction international relations are going, and we will be dominated by events instead of dominating them.