Professor Frédéric Lasserre obtained his PhD in Geography at the University of Saint Etienne and currently works at the Department of Geography of Laval University in Quebec. One of his specialisations is the geopolitics of water. Dr Lasserre is also researcher at l’Institut québécois des hautes études internationales (IQHEI), where he heads l’Observatoire de recherches internationales sur l’eau (ORIE). Furthermore, he is researcher at la Chaire Raoul-Dandurand en études stratégiques et diplomatiques (Université du Québec à Montréal).

I began reading geopolitics when I was 24, when I worked for a consulting group specialized in political geography. I had studied in business administration before and did not study geopolitics before this first job. This professional opportunity was a real chance for me as it enabled me to realize my personal interest in geography could serve professional goals and was very relevant when analyzing territorial issues.

Our topics at work, with this consulting group named Observatoire Européen de Géopolitique, were the political transformations of Eastern Europe in the wake of the fall of the communist governments, starting in 1989. But my PhD subject was on the maritime border issues of the South China Sea. I was very interested in this topic because of the complexity of the actors’ relations, because of the contradictory images the States involved used or did not want to use, because of the link between space, border, territorial images and discourse.

I later developed two other axes of research: 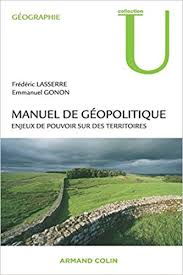 As far as the Arctic is concerned, I am in the process of finishing a book that should be published in Spring 2010, depicting the economic, social, political changes climate change is triggering in the region.

In my view, geopolitics is the study of all power stakes and struggles over territory. Whenever actors (not merely States) have projects dealing with territory that trigger a struggle with other actors, their relationship can be studied by geopolitics. This definition gives a very wide range of potential case studies, from the global scale to the very local, and with a large variety of actors: states, but also cities, associations, pressure groups, companies…

This definition runs contrary to another one commonly found, which merely stresses the power struggles between States at the global scale. If this is indeed part of geopolitics, I think we would be missing several issues with such a limited definition: first, what then would be the difference with international relations? and second, why limit geopolitics to this scale, whereas geography is precisely about scales of analysis of our space and territory?

I really appreciate the work of French geographer Michel Foucher about borders (see next question), where he stresses precisely the need to analyse every case study at different scales in space and time, using the actors’ mental images as well as taking other fields into consideration, such as sociology or economics. Geopolitics, like geography, is certainly not about an effort to discover so-called laws of geopolitics, which are a chimera, but about the analysis of the complexity of every case study.

“Fronts et frontières” by Michel Foucher (1991) is therefore one of my favourites, for the reasons listed above. It also reminded geographers and political scientists that borders are worthwhile studying in their definition, at different scales.

I think that, contrary to several political scientists, space and territory are not going to lose importance, quite the contrary. Border issues remain strategic; chokepoints in transportation retain their relevance. However, the world is increasingly multipolar: more countries will be competing and cooperating to have access to markets, resources and security. This can be done in a competition mode, but this is not necessary, for there is room for cooperation.

I believe that, as geopolitical theorists Yves Lacoste, Michel Foucher and Gearoid O’Tuathail clearly underlined, actors do not have a rational behaviour, as predicted by the realist theory. They act according to what they perceive as reality, but this perception is altered by their mindset, their understanding of the situation, and their own prejudice. They may be rational but their view of the reality remains subjective. Several situations could be better understood if this fundamental aspect of geopolitics was better studied.

Solve water, agriculture development issues, so as not only to counter the declining growth rates in food output, but also to enable local economies to develop themselves at least on a rural basis. Poor developing countries are facing real stability challenges if they do not manage to at least guarantee basic food supply.